The heat energy in the piston is absorbed by the rings. The rings then transfer this heat into the cylinder walls and eventually into the engine coolant or into the surrounding air (air-cooled engine). The table shown below provides data on this heat dissipation and transfer phenomenon under different engine operating conditions.

Since the piston rings are in firm contact with both the piston and cylinder wall, they can 'take' heat energy from the piston and transfer this heat into the cylinder. The graph above shows that approx. 70% of the piston's heat is carried away by the piston rings, under both unloaded and loaded engine operation conditions, at 1,500 and 3,000 rpms

Above from Riken Ring.. One of, if not the, largest ring producer in the world.

There are many reasons why , I THINK, BRP uses a single ring on the 800

1)When you have less heat transfer with a single ring, the ring gets over-loaded and ring seal fades and with fading you get combustion blow-by... With blow-by you get power LOSS.. So, if you have blow-by (which you do) and you Lose power (which happens with blow-by) then you will now be over-fueling the cylinder, contaminating the intake charge (due the blow-by) which, in turn, lowers charge purity, which in turn, lowers power... So, now you have made your engine make less power BUT you are still feeding it with the same fuel (via carb jets) for the stock power.. So, now you have created a over-fueling (rich) condition inside the engine.. Rich conditions COOL the piston which is needed because of the ring over-load, and this same rich condition also aids in the power LOSS.. you can not make power with an overly rich condition...
So, it is a cycle that repeats over and over.. ring over-loads, charge density lessens, rich conditions occurs, power ouput is dimished, piston cools, ring seals normal again, back to stock power (or close to it) rinse, wash, and repeat..

It is VERY hard to seize an engine with a very rich condition... This is a very good reason for BRP to use a single ring. Less engine failure due to over-fueling.

2) DETONATION.. there is that "buzz word" again.. One of the MAIN signs of detonation is hammering between the rings (2).. Deto if left untreated will hammer out the piston area between the upper and lower rings.. This area will crack and eventually break off causing some good engine damage.. VERY COMMON with Detonation.. Well.. with 1 ring.. it is impossible to hammer out the small area between the 2 rings because there is no second ring... ANOTHER good reason for BRP to use a single ring..

3) HORSEPOWER (DYNO POWER): single ring pistons WILL have less drag then a double ring Epsecially when the dual rings are quite thick.. and you are comparing them to a thinner single ring.. So, on short pulls (LIKE DYNO PULLS) before #1(above) occurs, the dyno run is over and the output power is up a few HP due to the shortness of the dyno pull.. 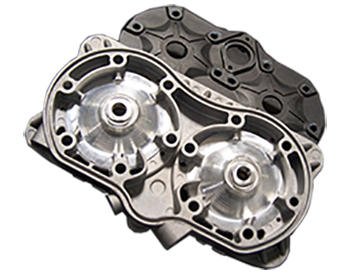